Since the first centuries of the Christian era, tradition affirmed that the small residence of the Virgin was located in Nazareth, where she was born, grew up, where the announcement of the Archangel Gabriel took place and where she lived until the wedding with Joseph. After the Resurrection, the Apostles would gather in this house and celebrate the Eucharist in accordance with the teaching of Jesus.

In early May 1291, Nazareth and all of Palestine were the domain of the Seljuk Turks. According to tradition some angels took the Holy House and carried it away in flight. On May 10, 1291 the angels left their home in Tersatto, near the city of Rijeka; they were woodcutters, amazed, to find the small home. In that place, however, pilgrims were often prey to thieves and evildoers; thus, three years and seven months later, the angels took up the Holy House and rose with it. They crossed the Adriatic and as soon as they arrived in the Marche they placed it near Ancona, on the hill on which the church of Santa Maria Liberatrice di Posatora stands today, a place (today fully inserted in the Ancona urban context) whose name the tradition derives from this event: posa-et-ora (fermati e prega). La Santa Casa restò in quel luogo nove mesi; poi gli angeli la sollevarono nuovamente (secondo i detrattori di Ancona perché la città dorica, per la presenza del suo porto cosmopolita, era piena di ebrei e miscredenti) e la posarono più a sud, nei pressi di Porto Recanati, in località Banderuola.

This time shepherds saw a dazzling light come out of the clouds and the house behind the light. The place, however, was too close to the sea and therefore exposed to the dangers of Turkish raids; moreover, there too, criminals began to rush to rob the faithful who came on pilgrimage. Eight months later the house would have been moved again by the angels, this time on Monte Prodo (where the town of Loreto was born), on land owned by the counts Stefano and Simone Rinaldi of Antici, two brothers who soon began to profit from the continuous pilgrimages of the faithful to the point of making a petition to Pope Boniface VIII to become its owners. Again the angels raised the Holy House in flight and placed it, at the end of 1296, in the center of the road that goes from Recanati to its port, and therefore in a public place, which no one could have claimed and exploited. The chosen location was on the top of a hill covered with laurels. From the Latin term laurus il luogo si chiamò Lauretum, e quindi Loreto.

The journey from the house of Nazareth to Loreto is called "translation of the Holy House" and with this name it is represented in the works of artists of past centuries. In the Marche and Umbria the tradition of lighting large fires is alive (i focaracci) in the night between 9 and 10 December to "lighten the way to the Holy House"; these are the fires of the feast of the Coming, meaning by "coming" the arrival of the Holy House. In 1617, thanks to the initiative of the Capuchin friar from Ancona, Tommaso, the custom spread widely throughout the Marche. For this reason, in the Catholic calendar, the feast of Our Lady of Loreto falls on December 10, the day on which the Marche day is also celebrated. On 12 September 1920 the feast for the proclamation of Our Lady of Loreto took place in Loreto as the "Patroness of the Aeronauts", decreed with a short apostolic by Pope Benedict XV on March 24 of the same year. 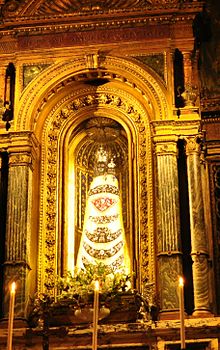 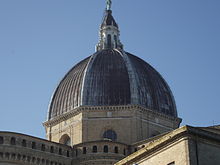 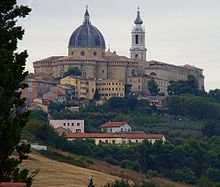 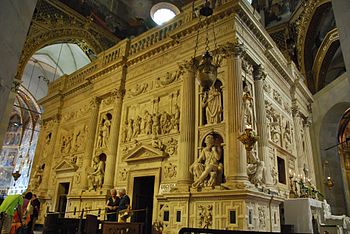 tourism in the marche